Murilo Santana is one of those guys who has a lot of success in tournament jiu jitsu but is relatively unheard off. He does not have a DVD instructional series, a subscription website or a host of moves named after him. What he does have is a highly effective and brutal passing style that has served him well competing against the some of the best guys in the world.

Posture in the over under position 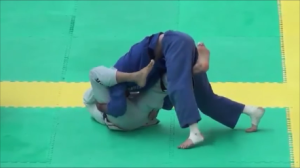 Murilo’s passing game is based around working from the over under. He will often pressure from this position for up to 6-7mins in the round and not really commit to a pass. In the last 3mins the exhausted opponent is passed and often submitted in rapid succession.

The over under position provides a number of advantages for the athlete:

1. Being latched onto the hips negates the advantages many flexible guard players have.

2. Inversion is incredibly difficult with this degree of hip control.

3. Adopting this passing strategy completely avoids all the cool guard positions. There is no spider, de La Riva or inverted DLR options.

4. The opponent is carrying your weight the entire time. This is exhausting for the bottom player. Their options are limited to destroying the head position and framing against the top man in an effort to recompose some sort of barrier. This is tiring work, doing dumb bell presses for 7mins will knacker anyone.

There are two really interesting things about Murilo’s personal passing game. First of all he is highly proficient in the passes outlined below on both sides. This is pretty unusual and is probably due to the fact that his passes are determined by his opponents responses.

Secondly he rarely does the traditional shin circle pass to side control. Perhaps he feels this methods offers up too much space when compared to the options outlined below or more likely he prefers passing directly to mount.

The side smash position 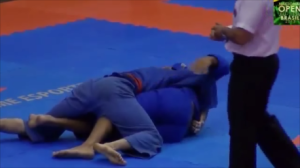 After pressuring his opponents long enough to make them start hating life he begins moving towards the opponents mid line I.e. the underhook side. This makes tilt sweeps more difficult as the leg grab is tougher. It also opens up the elbow and knee space for the shin circle pass, but as we know Murilo has no intention of going that way.

Instead he is moving all the way round to the side smash position. Lateral movement is the key here. He is actively raising and lowering his elevation, contouring his hips and moving to the underhook side. You an see this in action whenever anyone tries to elevate him with butterfly hooks. At times he appears to be floating on the end of these hooks before gracefully landing in the side smash as the opponents legs fatigue.

From the side smash he covers the top leg with the shin and moves to the side. The bottom mans hip positioning makes it really difficult to re guard, they are left with a crappy choice, accept side control or expose the back.

The flattened half guard

Often in the face of this pressure the opponent will shoot for half guard to increase the degree of control they feel they have in this situation. This rarely helps them. Instead of fishing for the underhook; very difficult to do on elite player, Murilo stays low and pins his head to the ground removing the threat of his opponents underhook while freeing up his own hand to actively post or assist in freeing the trapped knee on the way to mount.

With only the foot now trapped in guard the underhook is taken and solid forward pressure completes the guard pass. The opponent is mounted and in a seriously vulnerable position. The frequency with which Murilo taps an opponent after the pass may be due to the way in which he passes to this incredibly dominant mount.