Gordon Smith may have recently moved to Newcastle but he is a true Griphouse OG. He started Muay Thai with Guy before there even was a Griphouse. You all probably know him. He’s the guy that popularised the”scream your lungs out while throwing a jab” trend that is now thoroughly entrenched among our Muay Thai athletes.

He’s a noteworthy chap in that not only has he lost tonnes of weight he has also went on to fight all over the world, hold many titles and in general be a Muay Thai badass. He also found his wife here which is very cool.

Here is him in his own words and 3 different systems of weight measurement.

What made you first set foot in the Grip?

Guy came into Caley one day and said, ‘We’re getting a gym in Maryhill’.

I had been trying to get my weight down (I had reached the ‘heights’ of 110kg, or 17 and a bit stone in old money) for a while at Strathclyde University using the treadmill, exercise bike and weights, etc., but had gotten pretty bored by it all. A friend saw the flyer for Guy’s classes and wanted somebody to go with him. I decided to give it a go and was hooked from there. A few months later, my friend stopped going but by then I had started to try to find as many of Guy’s classes to go to as possible.

What effect has training at the Grip had on you?

Well I’m married and no longer classed as ‘Obese’ or ‘At Risk’ by doctors.

It’s literally changed my life, not to get all clichéd and teary-eyed, but I’ve made some amazing friends, including my wife, I’ve managed to fight on three continents (including a fight at Lumpinee Stadium in Bangkok) and was Scottish Champion for four years and Top 10 ranked fighter in the British rankings, all whilst losing almost 100lbs, quitting smoking and changing my diet/lifestyle in general for the better. In short, it’s turned my life around for the better.

Is there anyone in particular that has helped you out a lot?

There have been plenty of folk over the years, the main ones being Guy and Big Mike in the early days for not just seeing a vastly overweight, heavy drinking and smoking waster.

My main training partner when I first started fighting was Mike Strachan and I have to say that his outlook shaped the way I trained and fought a lot in the early years. Guy has been a constant and positive influence to me for more than 13 years running the gambit from friend to surrogate big brother to coach to training partner.

In the last few years there have been quite a few people who have shaped me as a fighter and in the way I train (in no particular order, and apologies for any unintentional omissions) T, Brian Calder, Keith McLachlan, Brian Totty (Jr and Sr!), Top Gun, Paul McVeigh (a.k.a. The Dark Lord of S&C), Adrian, the list goes on…..

What is it like being at the gym and would you recommend it?

Like being in a sweaty sauna that smells of protein farts most of the time. Yes, I would recommend it, but only if you like being sore and successful.

I would definitely recommend it as it’s by far the best place to be if you are looking to progress in Thai/MMA but also if you want a great place to train that doesn’t patronise you, judge you for not being ‘perfect’ or not fitting in like some gyms do. The only pre-requisites are self-motivation and determination.

Training at the Griphouse is very hard, but so much more satisfying and rewarding for it. Whenever there are a group of fighters all training for top level fights at the same time, there is no better place to be. You turn up everyday not knowing what’s going to happen but know that it’ll involve hard work with some of the best fighters in the UK and that you’ll be leaving sore and tired.

Unfortunately Since becoming a pro level athlete has destroyed every trace of his former fatter self. Seriously I even checked Bebo. So we can’t get the before and after stuff people find so popular.

All off the Grip guys are sad to see Gordy go and hope he has success and a lot of fun in his new endeavours. 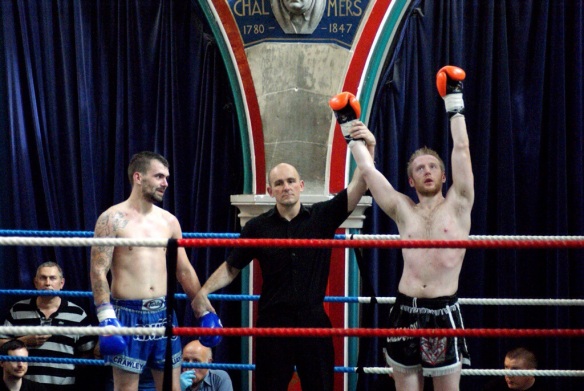